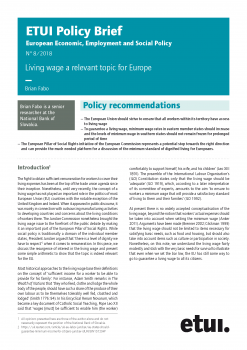 This policy brief examines the concept of a ‘Living Wage’ and its place in European political discourse. A Living wage is commonly understood as a needs-based estimate of the funds necessary for provision of basic goods for a worker and his/her family. Although the idea has seen a resurgence following the launch of the European Pillar of social rights, there is still no widely accepted conceptualization of it, or its relationship with statutory minimum wages now in place in many countries. The Briefing shows that minimum wages, particularly in Eastern EU countries, are often insufficient to cover the actual living costs of workers, even with very minimal conception of what these are.