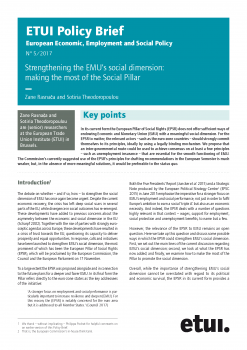 This policy brief examines how the European Pillar of Social Rights (EPSR) can be used to strengthen the social dimension of the EU. For the EPSR to matter, the relevant actors should strongly commit themselves to its principles, ideally through a legally binding mechanism. Starting from the premise that achieving consensus for committing to some of the Pillar’s principles is more likely to be forthcoming among Eurozone members for reasons relating to the better functioning of the EMU, this policy brief proposes using an inter-governmental Treaty route to implement some of these principles. This would then serve as the first step towards, or at least a trigger for, creating a stronger social dimension across the EU. The Commission’s currently suggested use of the EPSR’s principles for drafting recommendations in the European Semester is much weaker, but, in the absence of more meaningful solutions, it would be preferable to the status quo.

Policy recommendations The social dimension of the European Green Deal remains underdeveloped. The social and employment-related challenges of the green transition span many dimensions, such as job losses and employment transitions, reskilling and upskilling of the workforce, distributional effects of decarbonisation policies, the protection of... Find out more

This paper provides a critical assessment of the OECD's Employment Protection Legislation (EPL). This indicator is designed to measure and compare employment protection legislation across countries and has dominated much of recent labour market policy making in the EU.The authors of this paper demonstrate that the construction of this instrument... Find out more

Social dumping at work: uses and abuses of the posted work framework in the EU

This Policy Brief demonstrates how legal ambiguities in the EU’s regulatory framework on worker mobility between EU member states allow companies to circumvent social regulations in order to save on labour costs.Taking concrete examples from Finland and the Netherlands, the authors show that firms can use three types of social dumping strategy... Find out more

The reform of the EU’s public procurement directives: a missed opportunity?

This Working Paper provides a critical analysis of the EU Commission’s proposals to modernise and simplify its rules on public procurement. The author of the paper, Eric Van den Abeele, looks at the political background and reasons behind the EU’s revision of its public procurement directives. The reform aims at making the rules simpler and more... Find out more

EU initiatives on employee participation and social dialogue – fig leaf or cornerstone of the social dimension?

This text was originally published in spring 2007 as an article in volume 95 of the “Edition de Hans Boeckler Stiftung” series. The volume was entitled Social Embedding and the integration of markets: an opportunity for transnational trade union action or an impossible task?. Find out more