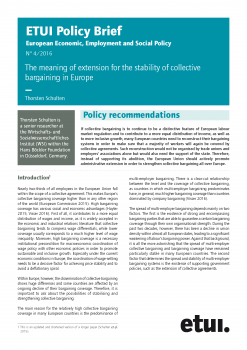 Although union densities have fallen markedly almost everywhere in Europe over recent decades, many European countries still have particularly high and stable levels of binding collective bargaining coverage. The main reason is State support for collective bargaining systems. A central feature of this is the instrument of the declaration of general applicability, which makes it possible to extend collective agreement coverage even to non-unionised workplaces. As these declarations are so important to the stability of European collective bargaining systems, it is particularly problematic that they are being called into question in many countries, as part of current anti-crisis strategies.

Against this background, the objective of this policy brief is to: (1) briefly review the different forms, the spread and current practice of extension mechanisms across Europe; (2) discuss the relationship between extension mechanisms, collective bargaining coverage and union density; and finally (3) formulate political recommendations of how to ensure the future of multi-employer bargaining through extension procedures.

Collective bargaining responses to the economic crisis in Europe

This Policy Brief provides an overview of collective bargaining responses to the crisis in Europe. It shows clearly that collective bargaining has proven to be an effective instrument to maintain employment and to allow companies to find flexible solutions to deal with the steep economic downturn. They note, though, that the increased pressure for... Find out more

This paper is an extract from the publication Collective bargaining on working time. Recent European experiences. Find out more