Reform and oversight mechanisms are not enough 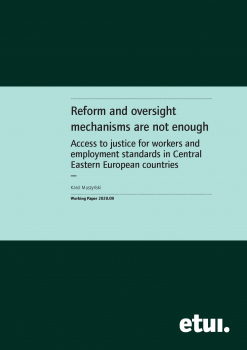 This paper argues that trade unions in Central Eastern European Countries (CEECs) should focus not only on improving formal legislation and its application but also on how the courts are interpreting this formal legislation by engaging in strategic litigation with the aim of fostering a pro-worker understanding of legal interpretations.

Statutory regulations have long been the principal tool to regulate labour markets across Central Eastern European Countries. However, as analysed by Karol Muszyński, formally established standards are not enough. The central focus of the publication lies in the workers' access to justice as a means to contribute to the improvement of working standards and the functioning of statutory regulations.

Access to justice is analysed in its broad sense, as the ability to seek and obtain a remedy for violations of formal rights through institutions of justice. Even though formal regulation grants rights to individuals, the actual ability to exercise those rights greatly varies as individuals may face barriers such as the high costs of bringing claims to courts or the lack of knowledge about one's rights. Besides, employees are often put in disadvantageous positions due to the non-enforcement of existing regulation. According to the author, individual access to justice may play a vital role in improving working standards on a micro-level, by expanding access to justice. On a macro level, better access to justice may enhance the position of workers in situations where employers' actions are of questionable legality.

Reform and oversight mechanisms are not enough-2020-WEB.pdf