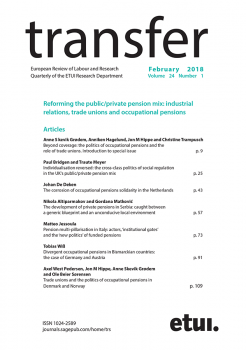 As public pensions are being retrenched across Europe there is an ongoing shift towards occupational pensions. The trend is far from uniform. Rather, when it comes to both coverage as well as the design and quality of pension arrangements, there is considerable variation between countries and indeed between sectors of the economy within countries. The aim of this special issue is to provide more insight into this variation, with a particular emphasis on the politics of occupational pension development, including the role of the social partners. The six articles in this issue address the challenges inherent in the expansion of occupational pensions, in a heterogeneous selection of European countries: Austria, Denmark, Germany, Italy, the Netherlands, Norway, Serbia and the UK.

This Working Paper critically reviews the empirical evidence and the basic assumptions on which European and national policymakers base their strategy of cutting and freezing public sector pay as one central element of the current crisis management. Using comparative studies and new statistical data, the paper demonstrates that these assumptions... Find out more

This Working Paper sheds light on the multi-dimensional and changing interplay between state, market institutions and social partners in relation to supplementary pension schemes, the importance of which is growing across Europe. The paper offers a lucid analysis of the responsibility shared among these three sets of actors to protect against the... Find out more

Precarious employment in the public and private sectors: comparing the UK and Germany