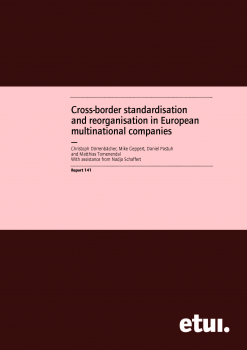 Multi-national corporations (MNCs) are constantly undergoing a process of standardisation and reorganisation (S&R), which is fuelled by the rapid development of information technology (IT). These developments require an in-depth and systematic inquiry as they have serious ramifications for labour and workers’ participation across Europe. Moreover, there is a lack of systematic research into the effects of these new, and especially IT based, S&R measures on the quality of labour and labour relations in European MNCs.
This report provides a comprehensive overview of new (and renewed) S&R trends in European MNCs and their effects on labour. It draws on a systematic analysis of relevant literature and expert interviews. Departing from an overview on the various phenomena related to S&R processes to be found in the literature, the expert interviews led to the identification of six main S&R trends: 1) the renewed impact of ‘lean production’ principles and ‘lean thinking’ on standardisation; 2) the critical role of outsourcing for standardisation processes; 3) new developments in HRM process standardisation; 4) IT-based standardisation; 5) standardisation by Big Data and Industry 4.0; and 6) compliance-induced measures of process standardisation. In practice, all six trends often interconnect to exert a strong impact on labour and labour relations in contemporary MNCs. Hence, the report explores the critical impact of the six trends on labour and workers’ participation across Europe, and also addresses their interconnectedness in relation to the powerful managerial rationales which trigger the observed new (and renewed) S&R moves.

This book contains the results of a study of workers' rights to information, consultation and participation in EU and national law covering cross-border mergers, which was undertaken by the ETUI’s GOODCORP network of academic and trade union experts on company law and corporate governance. Based on an analysis of available statistics, nine national... Find out more

The EU company law package: how it should be improved to strengthen workers' rights and avoid abuse through cross-border company mobility

The proposed EU company law package, which was published in April 2018 by the European Commission, seeks to encourage cross-border company mobility while at the same time protecting stakeholder interests. The ETUI’s GOODCORP network of company law experts has identified three areas where the package needs to be revised in the interests of... Find out more