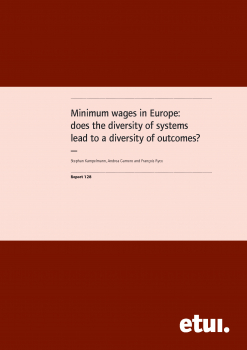 Since the mid-2000s, academics, trade unionists and policymakers have been involved in controversial debates about the need for a harmonised European minimum wage policy. This report by three academic experts leaves the beaten track of minimum wage analysis by focussing on the institutional diversity of minimum wage systems within the EU.

The central message of the report is that both the academic and the policymaking community could render the European minimum wage debate more relevant if they framed the current discussion as a choice between alternative systems rather than a choice of any particular rate for Europe as a whole.

The report shows empirically that “the combination of sectoral minimum rates and high levels of collective bargaining coverage can, at least for certain outcomes, be regarded as constituting a functional equivalent to a binding statutory minimum wage at the national level”. But the authors also look at possible trade-offs. Minimum wage systems with statutory rates at national level are related to relatively low wage floors but in systems without statutory minima, there are higher rates for insiders at a cost for outsiders.

All in all, the report demonstrates that the range of policy options related to minimum wages is much larger than the choice of any particular rate.