The concept of ‘worker’ in EU law: status quo and potential for change 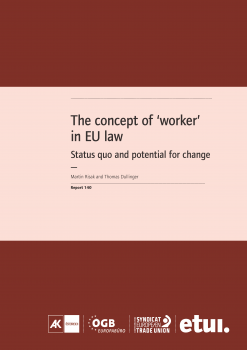 In the changing world of work and the emergence of new forms of employment that are often in the grey zone between traditional employment and self-employment the question of the scope of protection of labour and employment law becomes again more urgent.

Although defining the concept of worker is thus of utmost (and growing) importance, it is not legally defined (yet) at EU level, but has been shaped by numerous decisions of the Court of Justice of the European Union (CJEU, formerly European Court of Justice (ECJ)). This report analyses this jurisprudence and explores how and whether the underlying concept of worker is able to adapt to the changes in the world of work and still fit for purpose to protect those who are in need of protection.

Based on this, the study develops a European concept of worker which would be adapted to the new forms of employment namely to the self-employed that are in need of protection to a similar extent as traditional employees.