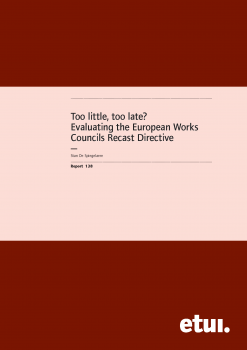 In 2009, Europe launched a Recast Directive on European Works Councils (EWCs) aiming to improve (1) the effectiveness of EWCs and (2) increase the amount of EWCs. In 2016, this Recast Directive will be evaluated by the European Commission. This report feeds into this, building on data of EWC agreements from the EWC Database managed by the ETUI.

The results show that the Recast was generally too little and too late to deliver on its declared objectives. The Recast did not stimulate the creation of more EWCs as it provided insufficient instruments to do so. The Recast did affect the content of EWC agreements on some domains, but generally came too late to have a significant effect. In many ways, the Recast reflected the most common practices rather than stimulating best practices.