A quantitative analysis in the metalworking sector 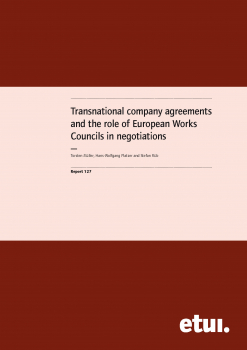 As a rule, the competences of European Works Councils (EWCs) are limited to information and consultation. Nonetheless, the number of European company-level framework agreements negotiated by EWCs and/or trade unions has increased steadily since the early 2000s. By the end of 2011, 119 such agreements had been concluded.

Based on telephone interviews with EWC members from 82 companies in the metalworking industry, this study investigates the emergence and dynamics of both formal agreements and informal arrangements. The study for the first time reveals the existence of informal arrangements between EWCs and transnational management which are documented in the minutes of meetings or in some cases are agreed only verbally. Like formal agreements, they serve to harmonise company policy on a wide range of issues such as transnational restructuring, remuneration issues, health and safety policies and shaping industrial relations arrangements within the company. They are therefore an important alternative tool of regulation at European company level.

These findings suggest that: (1) in practice, EWCs go beyond their formal information and consultation role more frequently than is realized by either academics or policymakers –as well as many trade unions; (2) the regulation of industrial relations and working conditions at European company level is being promoted by more companies than was hitherto believed to be the case; and (3) because these developments are taking place within a legal vacuum, an optional regulatory framework at European level is needed which ensures negotiation prerogative for the trade unions according to their own internal procedures.

European Works Councils: contested and still in the making

Following the adoption of Council directive 94/45/EC (the EWC directive) more than 1,250 EWCs were established. This industrial relations institution was intended to ensure transnational information and consultation were available to worker representatives within MNCs that met the thresholds of the legislation. Initially the quality of information... Find out more

Are European Works Councils ready for Brexit? An inside look

On 31 January 2020, at 23:00, the United Kingdom (UK) officially ceased to be a member of the European Union (EU). One of the many areas that will likely be directly affected with regard to workers’ rights is the organisation and functioning of European Works Councils (EWCs). EWCs are company-level institutions set up in multinational companies... Find out more

Company restructuring across borders: with or without European Works Councils?

This policy brief takes as its starting point the fact that as soon as a company engages in European-level transnational restructuring, transnational information and consultation is needed to enable the social partners to consider the cross-border dynamic of the planned measures.This policy brief addresses the following questions: How widespread is... Find out more

Managers, BusinessEurope and the development of European Works Councils

This working paper looks at the views of managers responsible for European Works Councils (EWCs) within multinational companies on the operation of the institution. It also examines the policies of Business Europe on EWCs vis-à-vis the views of these managers.The findings of structured interviews with fifty-six EWC managers focus on management... Find out more

In 2016 it will be 20 years since the first European Works Councils (EWC) directive came into force in the EU. In the same year, the European Commission is planning an evaluation of the EWC recast directive that will undoubtedly lead to debate on the need for further review of European regulation of EWCs. The year 2015 also marks the fifteenth... Find out more

Negotiating flexibility and security in multinationals in Europe: the case for extending European Framework Agreements

This policy brief presents lessons from comparative research on collective bargaining on flexibility and security. It takes as its starting point field work undertaken in two EU- and two US-based manufacturing subsidiaries in Germany, Belgium, Italy and the United Kingdom.The research shows that the outcomes of local bargaining of trade unions with... Find out more

European social dialogue and transnational framework agreements as a response to the crisis?

This Policy Brief attempts to overcome the knowledge gap about how European social partners or workers’ representatives have tried to contribute to facing the challenges and mitigating the (negative) implications of the crisis. Find out more

During the last 15 years, research on European Works Councils has revealed significant information concerning the structure, dynamics and ability of EWCs to represent employees’ interests. A multitude of factors and conditions influencing the work and results of EWC activity have been identified. Until now, however, there has been little systematic... Find out more

European Works Councils: an assessment of their social welfare impact

The working paper analyses the impact of EWCs on four different groups: shareholders, creditors, managers and employees. It argues that EWCs provide a net benefit. There are no significant negative impacts on shareholders and creditors while there are clear positive benefits for employees and managers. Find out more

The Memorandum outlines a series of recommendations for policy making regarding EWCs based on fifteen years of research on how they function in practice. Its aim is to promote better functioning EWCs via a stronger and clearer legal base. Find out more

The EWC Directive of 1994 and its transposition in the Member States have been of considerable interest to trade unions over the years. Some of the key elements in the procedure for establishing EWCs are covered in these PowerPoint presentations, which contain slides on nine important aspects of the directive (e.g. those companies affected, the SNG... Find out more