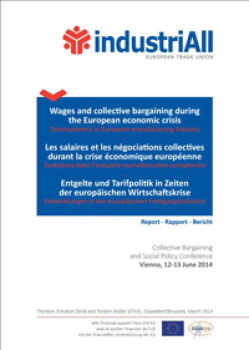 Since 2008, Europe has been affected by the deepest crisis since the 1930s. This has had a farreaching impact on the economic and social situation of millions of European workers. The most obvious impact has been the dramatic increase in mass unemployment. Today, there are more than 26 million unemployed people in the European Union (EU). It has been European manufacturing industry, in particular, which has suffered most from the crisis. Between 2008 and 2011, the number of manufacturing workers in the EU was reduced by more than 3 million. More than two-thirds of them came from the industries and sectors which are represented by the affiliates of industriAll Europe.

The aim of this study is to analyse the impact of the crisis on wage developments and collective bargaining in European manufacturing industry.