Young people at risk: how changes in work are affecting young Italians' health and safety 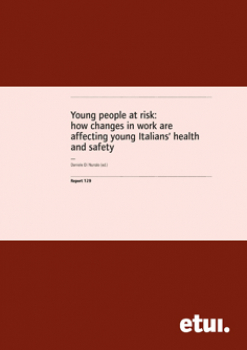 This report looks at the problems young people have getting a job in Italy, and the particularly poor employment and working conditions of those who do manage to get one. It is not a recent problem in Italy, but the crisis has made matters worse according to the figures collected by the report authors, researchers at the Italian Institute of Economic and Social Research (IRES). The participation rate of Italians aged 15-24 has fallen by 10% between 2000 and 2010, dropping to below 30% since 2008. This compares with an EU average for the same age group of more than 40%.

"The youngest workers have borne more of the brunt of the crisis even when in stable employment", note the authors. The jobs available to young people are all insecure: agency work, fixed-term contracts, too low-paid to achieve financial independence, etc. The report includes the findings from a survey of 1,000 workers aged 15 to 34, principally on their working conditions. The plight of younger workers is not one to be envied: higher work accident rates, unsocial hours, excessively fast work paces, low job discretion, etc. It comes as no surprise therefore to find that a third of Italy’s youth would be willing to emigrate for a better life.

While the problem cuts across all categories of young workers (graduates/unskilled, white/blue collar, etc.), young people from the lowest socioeconomic groups seem more permanently beset by insecurity than those from more well-to-do backgrounds.

When work affects health from one generation to the next

How to prepare for company change

This booklet is the third in a series of practical and easy-to-read manuals for European workers’ representatives. This time the focus is on facing restructuring, which is one of the most prevalent approaches adopted by companies in response to continuous change in the business environment. The purpose of this manual is to provide EWC and SE WC... Find out more

People affected by chronic conditions: the 'regulators of humanity' and their role in transforming work

The link between chronic disease and work is rarely considered. And yet it is an important reality in the workplace. In France, it is estimated that a quarter of the working age population is affected by a chronic condition. This equates to around 10 million people. It is likely that similar proportions would be found in other European countries... Find out more

Vocational education and training and the Great Recession: supporting young people in a time of crisis

One in five young workers in Italy works in retailing. Ten years of strong growth in this sector has given many young people a job. The downside is that most are casualised with few prospects and little task discretion; the work is both physically and psychologically draining, and accident risks are very high. During the 2000s, expansion in Italy’s... Find out more

How has the crisis affected social legislation in Europe?

This Policy Brief summarises the main findings of a European project set up by the association ASTREES and the research centre ERDS-CERCRID to assess the impact of the global crisis ravaging Europe since 2008 on recent developments in social legislation in Europe. The study shows that the initial ‘financial’ stage of the crisis did not produce... Find out more

The theme for this year's European Health and Safety Week was young workers. lt is a big issue. More than a million young workers are injured in work accidents in the European Union each year. Tens of thousands end up crippled for Iife. And they are widely exposed to other health risks that will leave them damaged lang after the exposure has ended... Find out more