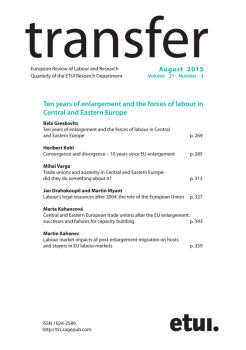 The process of eastern enlargement of the European Union (EU) embraced post-socialist countries in Central and Eastern Europe (CEE) for the first time in 2004, followed by further eastward EU enlargements in 2007 and 2013. These enlargements brought wide-ranging expectations for the economies, societies and labour markets of the new Member States in CEE. Among other expectations, EU enlargement fuelled hopes on the side of labour for improvements in living and working standards as well as in social protection after the difficult transition years in the 1990s. EU membership was also perceived as a potential and likely source for strengthening labour’s institutional resources. This should have occurred through more support for strengthening the basic pillars of western democracies, including through strong trade unions, collective bargaining institutions, a functioning tripartism and employee voice at the workplace, also in the new Member States.

Transfer stimulates dialogue between the European trade union movement and the academic and research community. It contributes research findings on issues of strategic relevance for trade unions, in particular with regard to developments at the European level. Transferpublishes original peer-reviewed research on issues such as new developments in... Find out more

This paper by senior ETUI researchers Béla Galgóczi and Janine Leschke looks at recent trends in labour migration from new EU member states to the EU15, with a focus on the impact of the crisis on intra-EU labour mobility. Based on data from the European Labour Force Survey, the findings of the study contradict expectations, previously expressed in... Find out more

In this, the fourth ETUI Policy Brief in 2009, the impact of the economic and financial crisis on Central and Eastern Europe is examined. Five years after EU enlargement, the new member states have been hit hard, contrary to initial hopes that their previous strong growth would make them immune. Bela Galgoczi, Senior researcher at the ETUI, shows... Find out more

Labour cooperation or labour conflict in the enlarged EU?

This paper examines how Western and CEE trade unions are coping with intensifying cross-border competition. It asks what strategies they employ to increase or preserve employment levels and to improve working conditions in a transnationally competitive environment. The evidence on Polish–German trade union relations in the automotive industry... Find out more