The need for an EU Directive on pay transparency 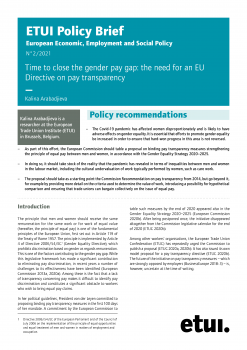 The Covid-19 pandemic has affected women disproportionately and is likely to have adverse effects on gender equality. It is essential that efforts to promote gender equality be increased in order to ensure that hard-won progress in this area is not reversed.

As part of this effort, the European Commission should table a proposal on binding pay transparency measures strengthening the principle of equal pay between men and women, in accordance with the Gender Equality Strategy 2020–2025.

In doing so, it should take stock of the reality that the pandemic has revealed in terms of inequalities between men and women in the labour market, including the cultural undervaluation of work typically performed by women, such as care work.

The proposal should take as a starting point the Commission Recommendation on pay transparency from 2014, but go beyond it, writes Kalina Arabadjieva (ETUI), for example by providing more detail on the criteria used to determine the value of work, introducing a possibility for hypothetical comparison and ensuring that trade unions can bargain collectively on the issue of equal pay.

Time to close the gender pay gap The need for an EU Directive on pay transparency.pdf

Generally speaking, women's issues are absent from health and safety policies: the hazards involved are either unknown or underestimated... Find out more