Towards a new paradigm in open strategic autonomy? 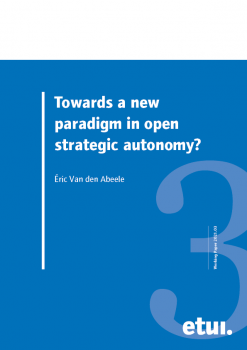 The aim of this research paper is to review the recent emergence on the European scene of the concept of open strategic autonomy and the consequences it may have for EU action. Originally stemming from the language of the common foreign and security policy (CFSP) and the common security and defence policy (CSDP), strategic autonomy now seems to have become the EU’s new catchphrase. Charles Michel dubbed it Goal No. 1 for our generation: ‘For now, much of the debate on strategic autonomy has been on semantics, marking clear political divides between countries that see this as a threat to Europe’s openness, and its proponents who see a chance to advance European industry and help foster “champions” able to compete on a global scale.’

At the same time, the green and digital transition, the resilience of the EU’s socio-economic model in the context of the pandemic and the recovery of the economies of the Twenty-Seven are taking up a great deal of space on the Union’s agenda. By 30 April 2021, each Member State has to submit its national recovery plan with two targets: devoting 37% of this budget to greening and 20% to digital. By 2030, the EU, for its part, has to reduce its CO2 emissions by 55%. Are these goals sustainable over a medium-term timeline (2030)? Is strategic autonomy the launchpad for a new European Union paradigm?

Towards a new paradigm in open strategic autonomy_2021.pdf

Policy recommendations Policymakers should adopt an extended conception of Europe’s open strategic autonomy, including socioeconomic and environmental aspects. As policies trickle down to citizens and workers, public acceptance of related initiatives that also take into account social circumstances and environmental realities right from the... Find out more