Trade and labour linkages and the US–Guatemala panel report 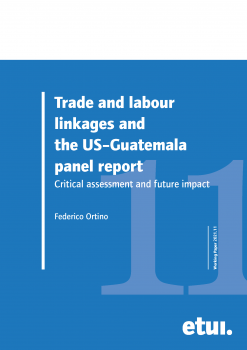 This contribution focuses on the phrase ‘in a manner affecting trade’, that is often found within labour disciplines in trade agreements, expressly linking labour standards (or their violation) to trade. The meaning of this specific phrase has been the subject of much discussion recently, particularly following the United States – Guatemala panel report in 2017. Relying on a relatively narrow interpretation of the relevant phrase – ‘in a manner affecting trade’ – the US-Guatemala Panel concluded that the United States (the complainant) had, for the most part, failed to demonstrate the required link between (i) the failure by Guatemala (the respondent) to enforce its labour standards effectively and (ii) trade between the CAFTA-DR parties, leading to the Panel ultimately rejecting the United States' claim.

Was the US-Guatemala panel correct in its interpretation of the 'trade effect' requirement in Article 16.2.1(a) of CAFTA-DR? As many labour obligations in free trade agreements (FTAs) adopt similar language (like the EU-UK Trade and Cooperation Agreement), answering this question has become crucial in order to assess the strength of labour obligations in trade agreements. The paper submits that, while the US-Guatemala decision was correct in focusing its analysis on the impact of Guatemala's failure to enforce labour laws on the conditions of competition in international trade, it erred in apparently excluding from the analysis the conduct’s potential effect on those conditions. Looking forward, the paper also argues that future dispute settlement panels should interpret similar linkage clauses in trade agreements by requiring claimants to show potential (rather than actual) impact of the respondent’s failure to enforce its labour laws on the conditions of competition in trade or investment. This would in turn ensure a greater bite for labour disciplines in trade agreements.