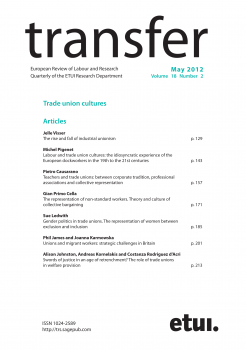 We could begin by asserting that trade unionism dates back a long time, even though its future appears so uncertain now, at the start of the 21st century and the end of the ‘industrial century’. This future will in any event be much more heavily influenced by the origins and cultures of the trade union movement than is commonly believed. An informal kind of ‘institutional path’ along which unions must travel in order to get through the most disruptive economic, social and political changes is coming to light. Their differences from political movements, and not only those on the left, are noteworthy. We would learn very little about the current tendencies of Europe’s political parties by observing their origins, precisely because they were unwanted children or children who cast off their parents. This is true of the Labour Party (above all in its New Labour configuration), but also of the glorious and mighty SPD, the perfect incarnation of a large-scale, well-organized political party.