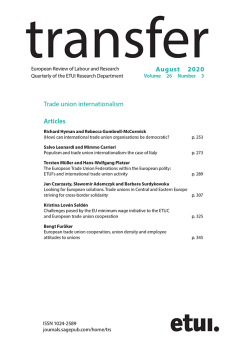 This special issue, the third in a series of Transfer issues on ‘the state of trade unionism in Europe’, examines the international activity of European trade unions. Trade unions in Europe today operate in a complex and multi-layered institutional environment, ranging from the workplace, where the central concern is the representation of members’ interests, through national structures, intent on establishing and maintaining viable industrial relations systems, to regional organisations and international structures, in the form of the European Trade Union Confederation (ETUC) and the European Trade Union Federations (ETUFs). The range of national trade union developments ensures that the affiliates to European-level institutions differ in structure, practice and politics. This special issue is about whether, and how, these differences may be incorporated in a European trade union strategy.

In recent decades, European and global economies have become more closely integrated: in commerce and production chains, as well as by international agreements and institutions. From one point of view, this has increased the need for transnational union cooperation, as unions face similar problems and the potential to increase union strength by international mobilisation has increased. Moreover, within the European Union (EU) the institutional infrastructure for developing transnational union cooperation is relatively strong in the form of organisations, an emerging legislative framework and the unified constitutional arrangements of the ETUC. Within this framework there are several instances of fruitful trade union cooperation. read more