Trade unions and the polity: agendas and alliances 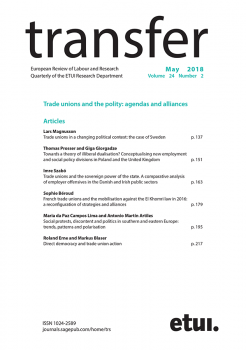 This special issue, the second in a series of Transfer issues on ‘the state of trade unionism in Europe’, focuses on the current role of trade unions in the polity. Throughout much of the 20th century, trade unions and social democratic parties were different elements of the labour movement, with unions fulfilling an industrial brief and political parties engaged within the polity. In recent decades the gap between trade unions and labour parties has widened, however, particularly as in many instances those parties adopted neoliberal economic policies one of whose key assumptions is that unions are a source of ‘rigidity’ in the labour market. The six articles in this issue map the resulting search for new agendas and alliances over time and across countries, representing different regions and varieties of capitalism in the European Union. The articles explore a palette of contemporary agendas and coalitions. These agendas include resistance to anti-labour legislation and austerity; using new channels and forums of direct democracy; embracing radical emancipatory demands; and, increasingly, accepting protection even with illiberal solutions. The choice of potential allies is similarly wide: it ranges from new and rebuilt left-wing parties and the EU to new social movements as well as populist right-wing parties and governments.