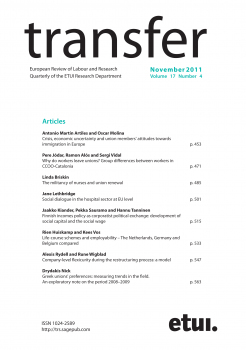 The common thread linking the contributions to this, the seventh open issue of Transfer, is the trade union response to new risks and opportunities of the national and European political economy. The first three of the eight articles included in this issue investigate ways in which union members have reacted to the competition of immigrant labour forces, expansion of precarious employment forms and crisis-driven restructuring either by ‘voice’, namely strikes or political mobilization, or by ‘exit’ from the labour movement (Hirschman, 1970). The remaining five articles consider union efforts to co-build and/or use new institutions of European-level informal social dialogue in the health care sector, the weakening of centralized collective bargaining and the effects on corporatism, national schemes of employability over the course of a working life, firm-specific flexicurity models with enhanced corporate social responsibilities, and the general strategies for trade union interest representation.