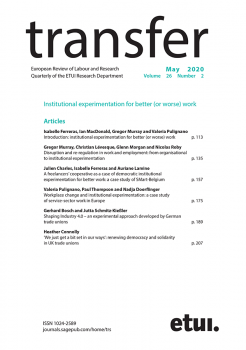 This issue of Transfer focuses on the role of work for the inclusion of people in society. In Europe the emphasis on inclusion through participation in work must be seen in the context of the restructuring of the welfare state, the prevailing macroeconomic strategies and the labour market policy paradigm. During the 1980s and 1990s the neo-liberal strategy and its attendant policies became increasingly dominant in Europe. At heart this strategy emphasises the regulation of social reproduction by the market. This means that political and other collective regulations are to be substituted by or adapted to market forces. Political regulation is increasingly directed along and in harmony with the market, and not against it. It is the time for ’commodification’ instead of ’de-commodification’. There is less room for public sector production of social services and for social security provided by the welfare state because neo-liberal macroeconomic strategies emphasise strict budgetary constraints and a low inflation rate. The reduced scope for fiscal policy restrains welfare policies, while economic and employment downturns put a heavy strain on social expenditure. Economic crisis, or just the expectation of such, demands an immediate response to cut public expenditure. The economic buffer zone is narrow in a monetarist regime, and policies have to be carefully designed to secure an optimal allocation of resources.