Understanding the ban on the cumul des mandats 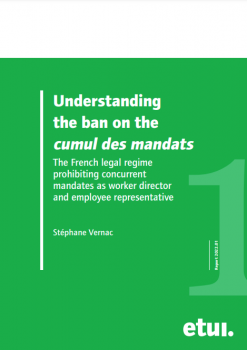 Taking up a mandate in a multinational company can be a challenging experience for trade union and workers’ representatives in countries across Europe. And when it comes to board-level representation, the challenge becomes even greater.  These difficulties have largely gone under the radar of policymakers at the EU level, but the case of France explored in this report illustrates well how board-level employee representation, as regulated by national law, can be of great relevance to the EU level and should be addressed by European trade union action.

As in many other Member States, France’s legal system grants employees the right to appoint one or two representatives to the boards of large companies and groups. However, a lesser-known characteristic of the French system obliges the newly appointed representatives to resign from the other workers’ representative mandates they may have elsewhere in the company once they come onto the board. In practice, employers do not apply this law consistently: whereas some workers’ representatives in French boardrooms are allowed to keep their other representative mandates, others are forced to resign not only from their mandates
within the same company (e.g. on the European Works Council) but also in their "foreign" subsidiaries.

The legal prohibition to accumulate mandates under French law substantially conflicts with the underlying logic of board-level employee representation in other European countries, where employee representatives sit on boards because their mandate is considered a right of their works councils or their trade union – at the very least, it is seen as the cherry on the cake of the employee representation system. It is of both practical and political relevance too, as non-French representatives often ground their legitimation on a parallel role in the (European) works council or the trade union delegation in their own company, which supports them in fulfilling their representative function on the board. The issue is complex and multifaceted, and the diversity of national and trade union contexts must be taken into consideration.

Understanding the ban on the cumul des mandats_2022.pdf