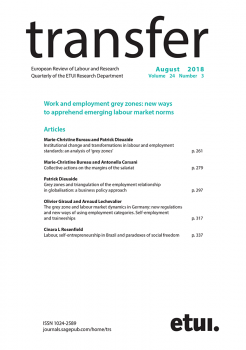 Attempts to use or adapt categories and mind-sets still anchored in the 20th century wage labour society in order to comprehend work practices in global labour markets are now commonly recognised to have reached their functional limits of significance. The five articles published in this issue of Transfer take a different approach. They propose problematics that find coherence in the far-reaching changes in employment relationship norms in the context of globalisation, through what they term as ‘work and employment grey zones’, an alternative to dualistic approaches.