A quantum of solace? An assessment of fiscal stimulus packages by EU Member States in response to the economic crisis 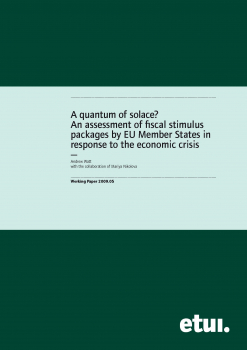 This ETUI Working Paper analyses the fiscal stimulus packages implemented by EU Member States against the background of the on-going economic crisis. Alongside the overall volume of the packages, the study, which is based on a survey of national experts, considers their content and also the involvement – or lack of it – of the social partners and particularly trade unions.

Overall the packages offer only a ‘quantum of solace’ to Europe. Against this background the widespread self-satisfaction on the part of European and national policymakers about the response to the crisis, and an increasing focus on early exit strategies from fiscal stimulus are inappropriate. European governments, faced with the unprecedented scale of the crisis, have taken action to stimulate their economies. But the crisis has exposed weaknesses in economic governance in Europe that should be addressed as part of the reforms being planned to ensure that such crises are not repeated in future.