'Better regulation': a bureaucratic simplification with a political agenda 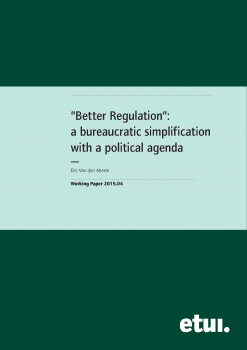 This Working Paper aims to shed light on the machinations behind recent developments regarding the Better Regulation agenda. How should we interpret the Commission’s insistence on relentlessly attacking its own legislation? Why does it constantly refer to the costs, yet never once mention the benefits? Eric van de Abeele, who has already written several publications on the subject, has taken an in-depth look at seven key components of the Better Regulation agenda with a view to unveiling the Commission’s real intentions.

He discovered a number of subtle, extremely discreet influences behind the Commission’s prized regulatory impact analyses. In the author’s view, the process to simplify European legislation has “fallen prey to a set of very specific interests”.

While the Commission originally wanted to relieve the European Union’s administrative burden, the Better Regulation exercise has ended up creating a parallel bureaucracy staffed by ‘experts’ and other ‘stakeholders’ whose interests are unclear. The path currently being followed by the Better Regulation agenda certainly raises plenty of questions about the European Union’s democratic structure.

Full text of the working paper