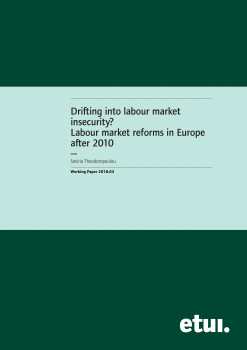 This working paper examines the impact of fiscal austerity on EU labour market policies. Using a case study approach, it examines: the extent of change in unemployment benefit levels and policies; the effect of this on groups of workers; and whether the logic of activation policies has shifted. Overall, the broad direction of policy has not altered greatly under austerity. However, risks remain that an underlying move towards greater flexibility may lock in ‘low road’ growth strategies that will make it harder to bring down debt and unemployment in future.

By providing a detailed map of developments in labour markets after 2010 in 11 country case studies, the working paper tackles broad questions of welfare state change under conditions of austerity. It finds that, rather than following strategies of either retrenchment or expansion in welfare systems, the countries under examination have combined several elements in what can therefore be termed ‘mixed’ reform programmes. As a result, divergence across and within labour market regimes are much in evidence. Overall, however, the reforms amount to a move towards more flexibility and activation, and less security and protection.  The paper also notes that, while labour market policies remain a national competence, the indirect pressure for reform from the EU has increased substantially.