Employee representation in corporate governance: part of the economic or the social sphere? 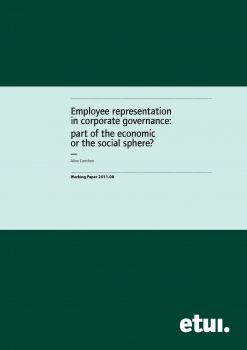 Observers of the European Company legislative process identified the then-competing political projects as being driven in one case by the desire for harmonization, whereas the other focused on a flexible approach to regulating employee participation. Since the European institutions have definitively adopted the latter approach in the meantime, this reading became obsolete. This ETUI Working Paper proposes to adopt a new analytical framework that will help give better insight into what is at stake in the drafting of European legal rules on corporate governance and worker participation, such as the pending European Private Company Statute. It argues that the regulatory game at European level is revealed by the competition between the players' two different world views: (1) one in which the economic and social spheres are viewed as being independent and disembedded, like the fields of company law and labour law; and (2) another in which, on the contrary, the two spheres are seen as being embedded in such a way that a comprehensive regulation should encompass both legal fields. Applying this analytical framework to an examination of the positions of the ETUC and the European Commission on regulating board-level employee representation at transnational level reveals the extent of the competition, hence explaining recent legislative difficulties.

Brexit has a number of implications for companies operating in the UK as well as for company law and corporate governance in both that... Find out more

Board Level Employee Representation in Europe

Board Level Employee Representation in Europe analyses the role, activities and networking of board level employee representatives in... Find out more

The two pack on economic governance: an initial analysis

This background analysis provides a first critical assessment of the two regulations on European economic governance (known as the 'two pack... Find out more

For more than two years, the European Union has been endeavouring to cope with an unprecedented public debt crisis. Under pressure from the... Find out more

17 European Member States and Norway have enacted legal provisions allowing for employee representation, with voting rights, on the... Find out more

Nano governance: how should the EU implement nanomaterial traceability?

This Policy Brief addresses the need for a governance response from the European bodies to establish a registry of nanomaterial-containing... Find out more

The Sustainable Company: a new approach to corporate governance

For the past two decades corporate governance reform in Europe has been guided by the ‘shareholder value’ model of the firm. That model has... Find out more