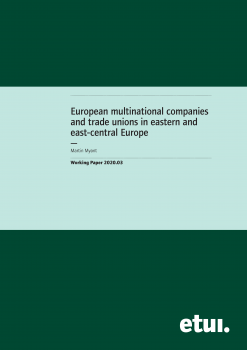 Are foreign multinational companies more or less likely than domestically-owned firms to recognise trade unions and engage seriously in collective bargaining? On the face of it, a multinational company is in a stronger position relative to employees as it can play off one group against another. On the other hand, big multinationals often recognise unions in their home countries. The US trade union confederation the AFL-CIO is hoping to improve organisation in branches of European companies in the southern states of the USA. What can be learned in this respect from experience inside Europe?

In this working paper, Martin Myant (associate researcher) looks at the behaviour of foreign companies, mostly western European, in the new EU member states of eastern and east-central Europe. Foreign companies are totally dominant in much of manufacturing industry in these countries and also strong in retail, banking and other service sectors. Manufacturing firms have often come to take advantage of wage rates under half the western European level, exporting products back into western Europe.