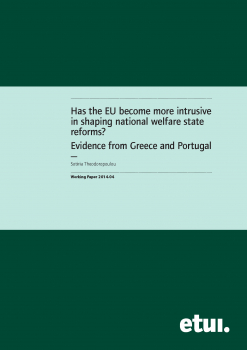 This paper provides a comparative analysis of the Memorandums of understanding (MoUs) in Greece and Portugal in the areas of old-age pensions and labour market policies and shows that, compared to earlier economic governance instruments, the MoUs have entailed much greater interference in setting policy objectives, tighter surveillance and stricter enforcement.

These three dimensions of EU intrusiveness in national social policies have been greater, the more the implementation of the programmes was seen to be stalling, the more adjustment in fiscal or competitiveness variables had failed to take place according to plan and the more direct the relevance of a given policy area for the adjustment in question was.

Although the measures promoted by the EU in the two countries were sometimes in the direction of extending the coverage of the social safety net, the drive to cut expenditures in combination with the increased needs for social protection that the crisis generated led in balanced to weakening the social safety net.

See also the video interview with the author on this working paper.