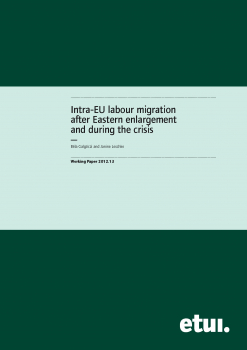 This paper by senior ETUI researchers Béla Galgóczi and Janine Leschke looks at recent trends in labour migration from new EU member states to the EU15, with a focus on the impact of the crisis on intra-EU labour mobility. Based on data from the European Labour Force Survey, the findings of the study contradict expectations, previously expressed in the literature, according to which deep recessions will result in a slowdown in migration flows. The overall stock of EU10 population in EU15 countries has continued to grow during the crisis, except in Ireland and Spain, two countries that were particularly hard hit by the recession and which, prior to the crisis, exhibited large EU10 migrant inflows.

When looking at the direct impact of the crisis, the authors find that, in terms of both employment and unemployment rates, EU10 migrants in the majority of EU15 countries were harder hit by the crisis than were nationals and thus appear to have served, at least partially, as labour market buffers. Paradoxically, however, due to a stronger influx of EU10 migrants to EU15 labour markets during the crisis, their absolute numbers in employment grew, while the employment of nationals generally decreased.

Other important issues addressed in the paper include the use of posted workers and (bogus) self-employment to circumvent restrictions on labour mobility imposed by transitional measures, and the mismatch between the skills of EU10 migrants and the jobs they take in the EU15.

The findings show strong evidence of over-qualification and the corresponding underutilisation of EU10 migrant workers’ skills. This finding, insofar as it contradicts the expectation that greater labour mobility will automatically contribute to a better functioning of European labour markets, poses a major policy challenge.