Mind the gap: net incomes of minimum wage workers in the EU and the United States 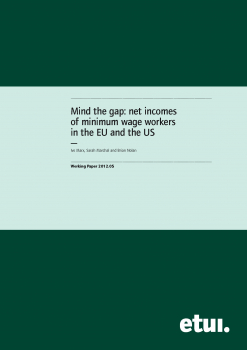 This working paper focuses on the role of minimum wages, in conjunction with tax and benefit policies, in protecting workers against financial poverty. It covers 20 European countries with a national minimum wage and three US States (New Jersey, Nebraska and Texas). It is shown that only for single persons and only in certain countries do net income packages at minimum wage level reach or exceed the EU’s at-risk-of poverty threshold, which is set at 60 per cent of median equivalent household income in each country.

The authors also argue that there appear to be limits to what minimum wage policies alone can achieve in the fight against in-work poverty. The route of raising minimum wages to eliminate poverty among workers solely reliant on it seems to be inherently constrained, especially in countries where the distance between minimum and average wage levels is already comparatively small and where relative poverty thresholds are mostly a function of the dual earner living standards. In order to fight in-work poverty new policy routes need to be explored.

The paper offers a brief discussion of possible alternatives and cautions against ‘one size fits all’ policy solutions.