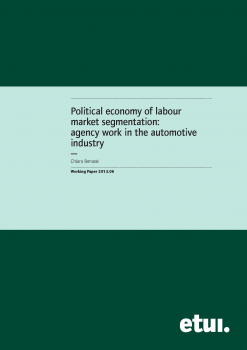 This paper investigates cross-company variation in the core-periphery configuration of the workforce. The empirical focus is on four automotive plants in Germany, which differ in terms of their organisation of agency work. The comparison reveals that there is no automatic relationship between skills, products and company workforce structure. As traditional employer-driven explanations such as production requirements and skills fail to make sense of the variations encountered, the main argument of the paper is based on the power-resource approach.

More specifically, the strategy devised by works councils in relation to managerial imperatives has a major role in shaping employment and the core-periphery configuration in the subsidiaries. The key power resources that condition the strategy adopted by worker representatives are constituted also beyond the workplace, insofar as the plant’s socio-economic context – including factors such as the local unemployment rate, or the threat of outsourcing and labour market deregulation – matters as much as the company-level industrial relations.

The paper thus challenges the interpretation of segmented labour markets as a dual efficient equilibrium and points out the political and contested nature of segmentation. The empirical evidence presented here has a wider significance as practices in German automotive MNC, characterized by Europe-wide production networks, are likely to affect a large number of workers across Europe.

The challenge of digital transformation in the automotive industry

This book addresses the impact of new technologies, typically discussed under the heading of Industry 4.0. It focuses in particular on the automotive industry which has been at the forefront of introducing new technologies such as industrial robots. It analyses their impact on working conditions and employment as well as on the role of production... Find out more

Myths of employment deregulation: how it neither creates jobs nor reduces labour market segmentation

This book looks at the effects of changes in employment regulation on levels and forms of employment in nine EU countries (Spain, Italy, Estonia, Slovakia, Poland, Germany, France, Denmark, and the UK). It demonstrates that reducing employment protection has brought neither labour market nor economic benefits. Moreover, post-crisis changes were... Find out more

The digital economy and its implications for labour. 2. The consequences of digitalisation for the labour market

This working paper provides an overview of foreign direct investment (FDI) in the automotive industry in Eastern Europe and Spain since the 1990s.The authors examine the main trends and patterns of FDI in Czechia, Poland, Hungary, Slovakia, Slovenia, Romania, Hungary, Serbia and Spain as well as the impact of the 2008 economic crisis on further... Find out more

Labour market segmentation and the EU reform agenda: developing alternatives to the mainstream

European employment regulation has been repeatedly identified by policymakers as too stringent resulting in policy recommendations aimed at a more flexible labour market. This diagnosis has been reaffirmed, particularly by international policymakers, in the post-2008 economic and jobs crisis with high employment protection regarded as harmful for... Find out more

Digitalisation of the economy and its impact on labour markets

This working paper gives an overview of the new possibilities opened up by the 4th industrial revolution and tackles some specific questions in relation to its effects on the labour market, including on the status of employees, on working conditions and on training. It examines the role that trade unions can play in the digital economy and the main... Find out more

This working paper provides an overview of labour market policies in the Slovak Republic, from the beginning of the post-socialist transition to the recent period, characterised by growing pressure for fiscal stringency from the European Union (EU). It investigates the differences between the prevalent trends in labour market policies before and... Find out more

This paper analyses whether developments on the labour market and in the welfare system during the economic crisis can be seen as perpetuating the trend towards labour market segmentation or whether the crisis may actually have contributed to containing some of the divisions forged in recent decades. The emphasis is placed on (involuntary) part... Find out more