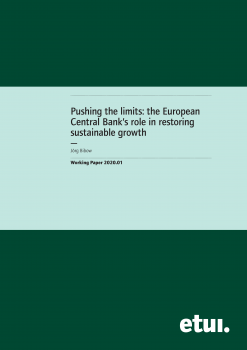 The European Central Bank (ECB) is a special, even unique central bank. It is a central bank without a treasury by its side or a state behind it, just as the euro, Europe’s common currency that the ECB is tasked with guarding, is a ‘denationalised’ currency. The euro area is a rare exception to the global ‘one state, one currency’ rule. But the ECB is not the only central bank in the euro area. Rather, the ECB is designed as the headquarters (or perhaps ‘cockpit’) of the Eurosystem, the system of European central banks that also includes the national central banks (NCBs) of European Union (EU) member countries that have adopted the euro as their common currency.

The euro has failed to deliver on its promises. While the euro area’s performance during the euro’s first decade was mediocre, things turned truly dismal when the global fi nancial crisis of 2007–2009 struck. In contrast to the rest of the world, which started to recover from the crisis in 2010, the euro area suffered a ‘double-dip’ recession. Only since 2013 has the euro currency union experienced a fragile, uneven and incomplete revival.

As the euro’s central bank guardian, the ECB has been a central force throughout the crisis and its aftermath. Many observers would argue that among the euro area authorities the ECB stands out as the most constructive. ECB president Mario Draghi’s famous ‘whatever it takes’ declaration in July 2012 stopped the escalating crisis and marked a critical turning point. As the euro area’s uneven growth slowed markedly in 2018–2019 and the recovery increasingly appeared at risk of unravelling, all eyes once again turned to the ECB to come up with another ‘whatever it takes’ attack-plan to restore the positive momentum and keep the recovery alive. The ECB duly delivered a fresh monetary stimulus programme in autumn 2019, prompting new controversies, especially in Germany.

But how much ammunition does the ECB really have left? Will it be enough to restore sustainable growth and save the euro for good?