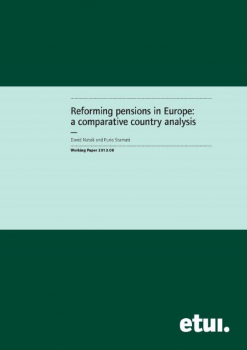 Focussing on eight countries (representative of different pension models) the study shows that these countries applied a similar two-step strategy in response to the crisis. After introducing anti-cyclical measures in the first years (2009-10), they all moved later (2010-12 and on) to austerity measures trying to improve the financial viability of pensions (e.g. revised indexation, an increase in the retirement age or a stricter link between contributions and benefits).

That said, these countries implemented different sets of measures to tackle their pension challenges. These differences were very much related to the institutional pension system inherited from the past and the magnitude and nature of the financial crisis hitting these countries.

Finally, the working paper also looks at the role of social partners in pension reforms in these countries and concludes that there is a broad trend towards a deterioration of the dialogue between governments and social partners.

This new working paper is intended to map reforms of employment protection law in the member states with the aim of addressing these legal changes in the context of the crisis, but also in the context of the deregulation agenda of the European Commission.The report critically addresses the large-scale deregulation of employment protection law in... Find out more

Pensions after the financial and economic crisis: a comparative analysis of recent reforms in Europe

This paper sheds light on the initial impact of the economic and financial crisis on pensions policy across Europe, and assesses the first measures proposed and/or introduced in four EU countries. The author argues that while the impact on different pension models naturally varies, some common trends can be identified: short-term measures to grant... Find out more

Europe needs to create jobs and growth and put its fiscal house in order to emerge successfully from the economic crisis. It also needs to make progress on restructuring its economy so as to achieve the ambitious climate-protection goals that the EU has set itself. This, the fifth ETUI Policy Brief European Economic and Employment Policy in 2010... Find out more