The European sectoral social dialogue: an uneven record of achievement? 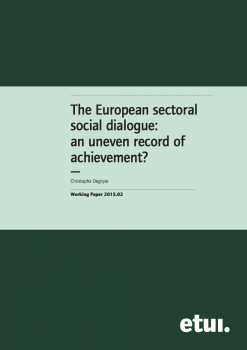 While the European intersectoral social dialogue has been, according to the Commission’s own admission, dragging its feet for the last few years on account of a lack of commitment on the part of the private sector employers, the sectoral social dialogue is often presented as a more dynamic and successful venture. A dialogue along sectoral lines has been set in motion by employer and labour organisations from a current total of 43 economic sectors of the European economy (from metalworking through road transport to public services and many others).

On the strength of its data base containing more than 730 joint texts produced in the context of the sectoral social dialogue, the ETUI set out to verify this claim concerning the dynamism of this process. The findings are that the sectoral dialogue has indeed continued to spread and that it has produced, in the last few years, a large number of agreements of substance. Yet the picture is not all rosy. While the dynamism of some sectors is impressive, others, by contrast, are languishing in a state of lethargy. What is more, some member states have recently displayed reluctance to transpose social dialogue agreements implemented by means of directive, even though provision to this end is contained in the Treaty. Finally – and this feature may already be the consequence of the foregoing – the sectoral social partners have in recent years produced more ‘joint lobbying texts’ addressed to the European institutions than ‘joint agreements’ concluded, for example, in order to improve working conditions, training facilities, or workplace health and safety provision.

The European social dialogue. The history of a social innovation (1985-2003)

The aim of this book is to trace the history of the social dialogue, from its origins to its autonomous empowerment, based on the testimonials of those responsible for designing and developing it, looking at the various texts from joint opinions to autonomous agreements, and analysing how the social dialogue functions. It thus offers a ‘human’... Find out more

This Summer’s World Cup in Russia will showcase an array of expensive footballing talent. Off the pitch, however, moves are also afoot to bring the sector under the auspices of European Union employment legislation. This Working Paper looks at regulation of the football ‘industry’ in the context of emerging supranational modes of sports governance... Find out more

Since 2006, representatives of the staff and management of private and public hospitals have met regularly as members of the European Sectoral Social Dialogue Committee for the Hospital Sector, a body recognised by the European Commission. Occupational health issues quickly made it onto the agenda, and tangible results were soon achieved, with an... Find out more

European social dialogue and transnational framework agreements as a response to the crisis?

This Policy Brief attempts to overcome the knowledge gap about how European social partners or workers’ representatives have tried to contribute to facing the challenges and mitigating the (negative) implications of the crisis. Find out more