The king is dead – long live the king: what follows after the Troika? 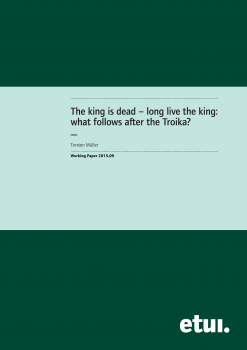 The focus of this paper is the need to reshape the financial assistance programmes and the related activities of the Troika in a way that would make them more socially and democratically acceptable. The starting point, therefore, is an analysis of the current role of the Troika and of each of its three constituent institutions in the framework of the financial assistance programmes.

This analysis is followed by a discussion of the new style of European interventionism embodied by the Troika with special emphasis on the democratic and social deficits by which it is marred. Next, in order to describe the effects of this European interventionist approach as practised by the Troika, the example of wage and collective bargaining policy has been selected as a specific illustration. Finally, some concrete suggestions are put forward as to how the attempt at crisis management conducted by the Troika (or its successor institutions) might be set on a policy footing inspired by a
more socially and democratically oriented political vision.

This is a revised and updated version of a chapter published in German under the title ‘Die Troika: Kontrolle der Kontrolleure’ in von Alemann, U., Heidbreder, E.G., Hummel, H., Dreyer, D. and Göde A. (eds.) (2015): Ein soziales Europa ist möglich – Grundlagen und Handlungsoptionen, Wiesbaden: Springer VS, 261-284.

We would like to thank Springer VS for their kind permission to publish this revised and updated version as an ETUI Working Paper.