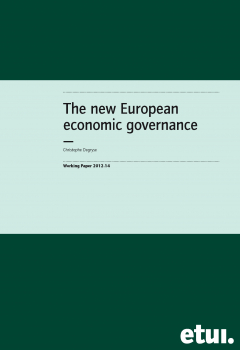 For more than two years, the European Union has been endeavouring to cope with an unprecedented public debt crisis. Under pressure from the financial markets, the EU and its member states have put in place a new set of regulations, procedures and institutions that have come to be known as the “new European economic governance”.

This Working Paper by ETUI Senior researcher Christophe Degryse provides a thorough historical overview of how this new European economic governance came about and what the new structures for surveillance, coordination and sanctions (Euro-Plus Pact, Fiscal Compact, European Stability Mechanism, and so on) mean for the European project. Starting from a clear analysis of the inherent weaknesses of the Economic and Monetary Union, it explains why the European Union is moving from one crisis to the next while sinking ever more deeply into a spiral of austerity with dramatic impacts on the prosperity of millions of European citizens.

The last chapter of the Working Paper questions the relevance of the proposed remedies and criticizes the austerity approach which uses “structural reforms” to undermine the European social model. It also looks at the democratic failure of the new economic governance and offers some first ideas for an alternative approach based on investment and solidarity rather than economic and social competition.

From growth to well-being: a new paradigm for EU economic governance

This policy brief criticizes the European Economic Governance system for being too narrowly focused on economic growth and competitiveness... Find out more

Within the framework of the new European economic governance, neoliberal views on wages have further increased in prominence and have... Find out more