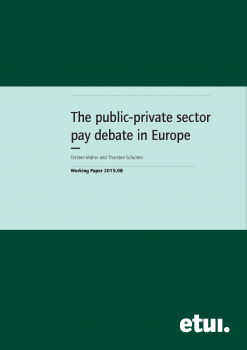 This Working Paper critically reviews the empirical evidence and the basic assumptions on which European and national policymakers base their strategy of cutting and freezing public sector pay as one central element of the current crisis management. Using comparative studies and new statistical data, the paper demonstrates that these assumptions are wrong, as they rely on a 'excessively narrow conception of competitiveness as cost competitiveness' and they neglect the role of wages in generating domestic demand.

The paper concludes that driving down public sector wages is not the right recipe to get out of the crisis and underlines the need for a strong public sector to boost aggregate demand and provide a modern public infrastructure as major precondition for a competitive economy.

Against the background of governments’ consolidation strategies, ETUI researcher Vera Glassner provides an overview of recent developments in terms of pay, employment and reforms of the pay system in the public sector. Cuts and freezes of public sector wages were most frequently imposed unilaterally by the state. The author argues that the re... Find out more

Why there must be a public debate on nanos

“The sky’s the limit in the nano world”, is a pet quip among nanotechnologists. But the pleasantry doesn’t just point up the promised progress we expect nanos to bring. It also exemplifies the quantum leap into the unknown that industrialized countries and their so-called “emerging” rivals are poised to make – or may already have made. There is... Find out more

This Working Paper sheds light on the multi-dimensional and changing interplay between state, market institutions and social partners in relation to supplementary pension schemes, the importance of which is growing across Europe. The paper offers a lucid analysis of the responsibility shared among these three sets of actors to protect against the... Find out more

Precarious employment in the public and private sectors: comparing the UK and Germany