What drives wage gaps in Europe? 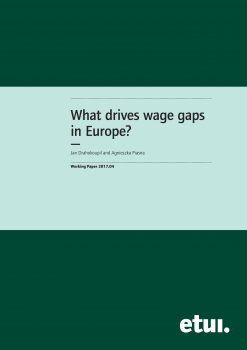 This working paper investigates wage differences across Europe. It estimates to what extent wage gaps in average wages observed between countries are related to differences in workforce composition, in workplaces, as well as the types of jobs conducted in different countries. This report also assesses the observed differences in returns on endowments by identifying which sectors and occupational groups contribute most to the wage gaps observed at the country level.

This new working paper explores why there is a persistent wage gap between western Europe and the new EU Member States of eastern and... Find out more

What role can minimum wages play in overcoming the low-wage model in central and eastern Europe?

This working paper gives an overview of minimum wage policies in Central and Eastern Europe. It shows that minimum wages are an effective... Find out more

Minimum wages continue to stir controversial policy debates. This study contributes to a better understanding of minimum wages by providing... Find out more