Withdrawal symptoms: an assessment of the austerity packages in Europe 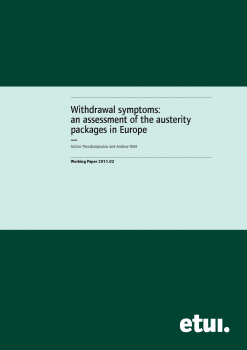 Based on a survey of national experts, this Working Paper evaluates from a European and national comparative perspective the austerity packages that the governments of EU member states have announced and implemented following the recent financial crisis and the Great Recession. The study raises serious doubts about the drive for austerity being embarked upon by EU countries. The simultaneous nature of the demand contraction, and the very limited offsetting impacts on demand via monetary policy and the exchange rate, mean that the output costs will be high. This, in turn, will drag out the consolidation period, possibly condemning Europe to a ‘lost decade’. Even if the aggregate growth and employment figures prove more favourable than in our assessment, the problem of the unbalanced nature of the European economy, especially that of the euro area, remains. Moreover, the Europe 2020 goals are highly unlikely to be achievable in a context of persistently sluggish growth and regressive distributional tax-and-spend policies and cutbacks in areas such as public investment, education and active labour market policy.

It is widely believed in policymaking circles that austerity is necessary for consolidation, and consolidation necessary for growth and jobs. In contrast, we believe that Europe needs to grow out of its public-sector deficits and debts, which resulted from the spectacular failings of an unregulated private sector, especially in finance. To do that it needs to invest. And it should embark on that course without delay.

Withdrawal symptons: an assessment of the austerity packages in Europe_2011