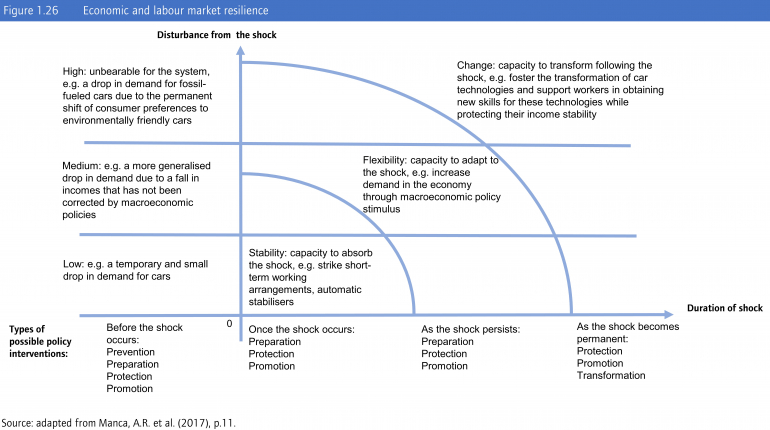 Developing greater resilience to (economic) shocks is an objective that has been gaining ground in official economic policy debates, particularly in the euro area, followingthe lasting scars that the recent economic and financial crises left but also in anticipation of the highly disruptive effects that the Fourth Industrial Revolution is expected to generate in European economies and societies and especially in the world of work (see also OECD 2018). In the context of the EMU, the definition of economic resilience proposed by the European Commission is the ability of a country to with stand a shock (for example, slower demand for its output) and recover quickly to its potential (growth) after it falls into recession (European Commission 2017, 2).  In a similar vein, both the Five Presidents Report and the Commission’s White Paper on Deepening the EMU state that the eurozone Member States should converge towards a cohesive establishment of ‘resilient economic structures’, which should  ‘prevent economic shocks having significantand persistent effects on income and employment levels’, so that they can reduce economic fluctuations, most notably deep and extended recessions.