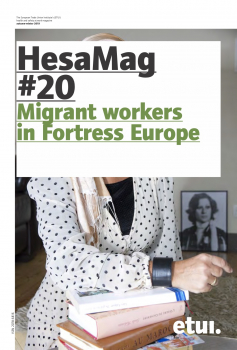 The number of legally resident migrants stands at over 22 million, but the number of Europe’s “undocumented” migrants, whose status is precarious and whose rights in many areas are limited as a result, is much harder to determine. These migrants are often forced to tolerate adverse working conditions; since they are discriminated against in the labour market, both male and female migrant workers are pushed into low-skill industries and professions that are more hazardous to health and less well-paid than other jobs, a situation that is justified by racist stereotypes and assumptions.

The goal of the HesaMag editorial team in compiling this report was to introduce readers to a number of real-life examples drawn from a variety of EU Member States. The migrant workers in all of these examples are caught in a metaphorical stranglehold that gradually squeezes the life out of them, and sometimes extinguishes it completely. One side of this is the status of being a non-national in one of the EU Member States, which can mean a denial of rights or even in some cases expulsion to a country where they are likely to fall victim to violence or discrimination. The other is the upswell of xenophobia confronting them, which is being stoked by far-right groups but tolerated with varying degrees of willingness by a much broader spectrum of political parties.

Fortress Europe may be erecting barricades to shut out the rest of the world, but these barricades are encountering resistance in the form of numerous new initiatives launched not only by groups of migrants who have banded together to fight for their rights, but also by other organisations acting in solidarity and out of a desire to build a fairer future. Trade unions – which from their very inception have striven to overcome the divisions and hatred that do nothing but harm workers – have also lent their support to these developments.

One copy of each issue of the magazine will be sent free of charge to any individual who subscribes in their own name. For orders of more than one copy, please choose the collective option.

It has been known for some time that the exposure of parents to carcinogens can endanger the health of their children. Ever since the 1950s, researchers have been studying children born to persons irradiated by the American atomic bombs dropped on Hiroshima and Nagasaki in Japan. If we consider the fact that all European countries now have cancer... Find out more

The Juncker years and their patchy record on occupational health

After 10 years of almost total paralysis inflicted by the European Commission between 2004 and 2014 under the leadership of José Manuel Barroso, has occupational health finally regained a foothold in European Union policies? The record of the outgoing President, Jean-Claude Juncker, whose term of office comes to an end in November 2019, is... Find out more

“A worker is a worker”: the trade unions organising migrants

Migrants are an integral, if often exploited, part of the European workforce, and trade unions across the continent are making efforts to organise them. However, they face a complex set of challenges, particularly if the workers are undocumented. Trade unionists from four different countries talk about their initiatives, revealing a remarkable... Find out more

Rocco and his brothers

The writer Angelo Ferracuti takes us across the Gioia Tauro plain in Italy in the company of “roving” trade unionists, seeking out itinerant workers who harvest citrus fruits for derisory wages. These are mostly African migrants who have fled from desperate situations in their own countries, only to find that living and working conditions in Italy... Find out more

The status of migrant female domestic workers in Europe: time for an overhaul

An increasing number of Europeans are calling on female domestic workers to help them in their ordinary daily tasks. Too few of these domestic workers enjoy decent working conditions that allow them to live in dignity. Must the well-being of a growing proportion of Europe’s citizens be secured at the expense of a minority that is more often than... Find out more

They leave their home countries intent on building a better future, but all that awaits them is exploitation. They work without papers in private households, often in exchange for a roof over their heads. Devoid of any specific training, they look after dependent and sick people, having to cope with overbearing emotional demands without outside... Find out more

Prostitution: a view from the other side of the window

Prostitution, migration, urban planning, social status and working conditions: the new book by Brussels-based historian and writer Hans Vandecandelaere covers a wide spectrum of themes. Don’t Ask Me Why is a study of the prostitution business and the working conditions affecting female sex workers in Belgium, including foreign nationals. Interview... Find out more

Frontex, keeping a forceful watch at the borders of Fortress Europe

With its coastguards and border guards, this is the European Union institution that has expanded the most rapidly. In the space of 15 years, Frontex has become the key agency in Europe’s migration policy, ensuring control of the periphery of the Schengen Area and policing the Mediterranean, from its headquarters in Poland down to Spain and the... Find out more

The walls of Magid Magid’s office in the European Parliament are bare. This is understandable, as the newly elected Member of the European Parliament (MEP) for Britain’s Green Party is in Brussels on a potentially short-term contract. At the time we are conducting this interview, the looming Brexit deadline means he could be packing up again, so... Find out more

Migrant workers: a threat to “our European way of life”? Or vulnerable and exploited?

Discriminations against migrants, engrained in the law, have an undoubtable impact on the quality of their working conditions. And because discrimination creates fiercer competition for jobs, this could, by a kind of boomerang effect, be damaging to employment as a whole. Are these migrants a threat to the “European way of life” or should they... Find out more

Europe’s coal industries: not dead yet

Coal mines are not just found in history books. Although doomed to extinction due to their catastrophic impact on the environment, they remain a reality in several European countries. HesaMag wanted to see what work was like in a coal mine and get to know the views of trade unionists working in the sector. We found a mixture of pride in a mythical... Find out more

Since 2014, there have been numerous articles in the Colombian press reporting illness or illness-related deaths among asbestos workers, members of their families and even individuals with no connection to the asbestos industry who were living ordinary lives – all in the small town of Sibaté. The increasing media interest prompted a team of... Find out more

Environmentalism from the bottom up

The Myth of Silent Spring is perhaps a rather provocative title. It references the book Silent Spring by Rachel Carson, published in 1962, which is often seen as the origin of environmentalism as a mass protest movement. While not denying the original book’s merits, Chad Montrie instead highlights the importance of a bottom-up, mass movement that... Find out more

The epic saga of migrants heading for Europe

A cornerstone of Western literature, Homer’s Odyssey recounts Ulysses’ perilous wanderings and the many mythological characters he meets before arriving home to liberate his wife Penelope and his son Telemachus. This story is used as a metaphor by journalist Patrick Kingsley in a captivating manner to narrate the saga of Hashem al-Souki, a Syrian... Find out more