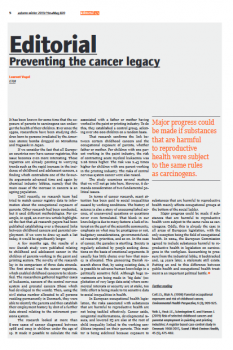 It has been known for some time that the exposure of parents to carcinogens can endanger the health of their children. Ever since the 1950s, researchers have been studying children born to persons irradiated by the American atomic bombs dropped on Hiroshima and Nagasaki in Japan. If we consider the fact that all European countries now have cancer registries, this issue becomes even more interesting. These registries are already pointing to worrying trends such as the rapid increase in the incidence of childhood and adolescent cancers, a finding which contradicts one of the favourite arguments advanced time and again by chemical industry lobbies, namely that the main cause of the increase in cancers is an ageing population. Until recently, no research team had tried to match cancer registry data to information about the occupational exposure of parents. Other research had been conducted, but it used different methodologies.

For example, in 1998, an overview article highlighted the fact that 48 research papers had been published establishing over a thousand links between childhood cancers and parental employment. If we were to draw up such a list today, it would be significantly longer. A few months ago, the results of a new Danish study were published relating to childhood and adolescent cancer in the children of parents working in the paint and printing sectors. The novelty of the research lay in its comparison of three data strands. The first strand was the cancer registries, which enabled childhood cancers to be identified. The researchers gathered together cases of leukaemia, cancers of the central nervous system and prenatal cancers (those which had developed in the womb). Then, using the civil status number allocated to all persons residing permanently in Denmark, they were able to identify the parents and then establish their employment history by dint of a further data strand relating to the retirement pensions system.The research looked at more than 8 000 cases of cancer diagnosed between 1968 and 2015 in children under the age of 19. It made it possible to calculate the risk associated with a father or mother having worked in the paint or printing industry. To do this, they established a control group, selecting over 160 000 children on a random basis.That research confirms the link between certain childhood cancers and the occupational exposure of parents, whether father or mother. For children with one parent working in the paint industry, the risk of contracting acute myeloid leukaemia was 2.26 times higher.

The risk was 2.43 times higher for children with one parent working in the printing industry. The risks of central nervous system cancer were also raised.The study examines several matters that we will not go into here. However, it demands consideration of two fundamental political issues. In terms of cancer research, scant attention has been paid to social inequalities caused by working conditions. The history of science is also a story of unaccomplished science, of unanswered questions or questions never even formulated. That blank in our knowledge is due to many factors: a lack of interest on the part of the scientific community, emphasis on what may be prestigious or not, budgetary considerations, government-funded research priorities, and so on. In the case of cancer, the paradox is startling. Society is regularly solicited by people seeking donations on the basis of emotional arguments. It usually has little choice over how that money is allocated. This pioneering Danish research shows that, by using existing data, it is possible to advance human knowledge in a politically sensitive field. Although huge investments are being made in "big data" (exploitation of very large data sets) where commercial interests or security are at stake, too little effort is being made to tie sensitive data to social inequalities in health. In European occupational health legislation, the risks associated with substances that are harmful to reproductive health are not being tackled effectively. Cancer aside, congenital malformations, developmental issues, and lowered IQ are also at the root of child inequality linked to the working conditions imposed on their parents.

This matter is being sidelined because exposure to substances that are harmful to reproductive health mainly affects occupational groups at the bottom of the social ladder. Major progress could be made if substances that are harmful to reproductive health were subject to the same rules as carcinogens. Oddly, this is already the case in all areas of European legislation, with the only exception being the field of occupational health. In 2004, the European Commission agreed to include substances harmful to reproductive health in legislation on carcinogens in the workplace. Succumbing to pressure from the industrial lobby, it backtracked and, 15 years later, a stalemate still exists. Putting an end to this difference between public health and occupational health treatment is an important political battle.

Imagine if an airplane crashed onto the runway of a European airport every day. After a few weeks, the situation would become politically untenable. With 300 deaths a day, and over 100 000 in a year, it would become an inescapable priority. I can already hear the objection: this is hypothetical fantasy. Of course it is. Its only purpose is to... Find out more