Asbestos: the long and winding road to a global ban 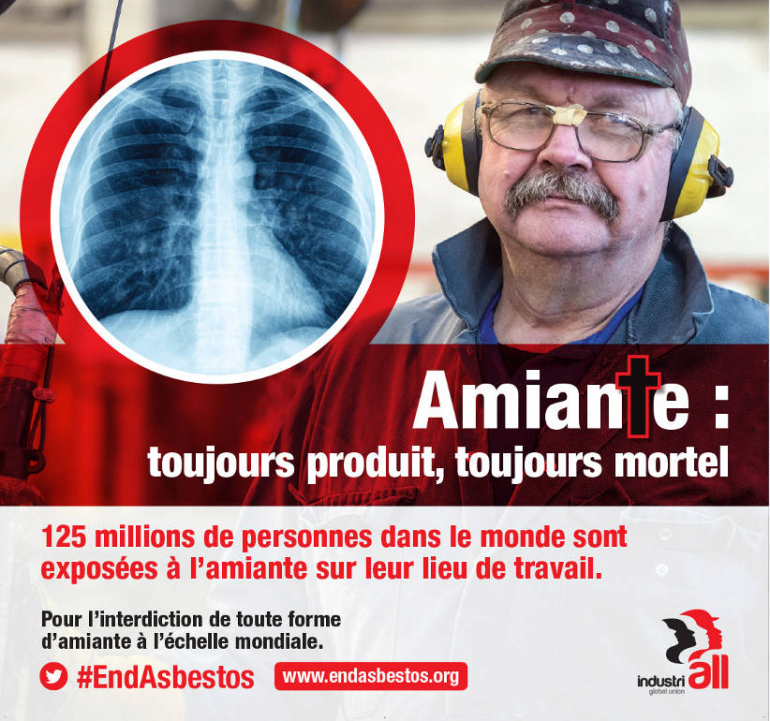 An important international meeting on toxic products opened in Geneva on 4 May with, as one of the main items on its agenda, the inclusion of chrysotile in the Rotterdam Convention. In spite of the deleterious effects of this form of asbestos, lobbying by producer and importer states has so far enabled this carcinogenic substance to remain outside the purview of this instrument. Trade unions and NGOs have mobilised to prevent a repeat of its exemption.

In Geneva the international trade union confederation IndustriAll has had posters depicting a lung x-ray, the photo of a worker and the slogan ‘asbestos still produced and still fatal’ placed on the outside of city-centre buses.

The purpose of the campaign is to imprint this issue on people’s minds and prevent the repeat of a deeply distressing scenario: since 2004 all attempts to include chrysotile in the Rotterdam Convention have failed because a few producer and importer countries have used their right of veto. For a long time the pro-asbestos revolt was led by Canada but, since closure of the last Canadian asbestos mine in 2012, its position has been taken over by Russia which continues to produce large quantities of the substance.

In spite of overwhelming scientific evidence and high mortality rates – the World Health Organisation gives the figure of 100,000 deaths a year – the pro-asbestos lobby continues to defend the principle of ‘safe use’ of asbestos, claiming that ‘white asbestos’ is less harmful than other types and that it presents no major risk for workers’ health so long as prevention measures are in place.

In spite of the unequivocal positions of the WHO and the International Labour Organisation (ILO) in favour of including chrysotile in the Rotterdam Convention, the asbestos lobby has so far refused to back down. According to anti-asbestos activist Kathleen Ruff, some twenty representatives of the chrysotile industry are present in Geneva. Alongside ‘historic’ pro-asbestos lobbyists from Canada these include representatives of the countries currently most involved in the asbestos trade, namely, Russia, Brazil, Vietnam, Ukraine and Kazakhstan.

Asia is today the main market for the last asbestos-producing countries. According to Laurie Kazan-Allen, head of the International Ban Asbestos Secretariat, the main NGO fighting for a total ban on asbestos, between 2011 and 2013 Asia accounted for 72% of world asbestos consumption. While China remains the biggest importer, India, Sri Lanka, Vietnam and Indonesia have all seen a steep increase in their imports since 2000.

The Rotterdam Convention, which covers other types of dangerous substance including numerous pesticides, does not prohibit the manufacture of or trade in the substances included in its Appendix 3, stipulating merely that the importing countries must be informed that these products are dangerous and that they have the right to refuse their import (Prior Informed Consent Procedure).

The debates on inclusion of chrysotile in the Rotterdam Convention are to take place between 11 and 14 May.

Though the production and import of asbestos are (with one exception) banned within the territory of the European Union, a large part of the European continent remains affected by this macabre trade, as was reiterated by the WHO at the end of April in a report targetting 16 European countries, most of them former Soviet republics, that continue to authorise asbestos. The UN organisation thus estimates that still today at least one in three Europeans may be exposed to asbestos in the workplace and the environment.

In western Europe workers – but also the population at large – continue to pay a heavy toll in relation to asbestos. A recent study revealed the existence of clusters of mesothelioma, a rare cancer linked virtually exclusively to asbestos exposure, in Italian towns where industries associated with this mineral had been set up. Such industries include not only asbestos cement production, but also shipyards, the defence industry, steelworking and metalworking, petrochemicals, building, textiles, railways, etc.