Denmark: close watch over the working environment of the 'green giant' 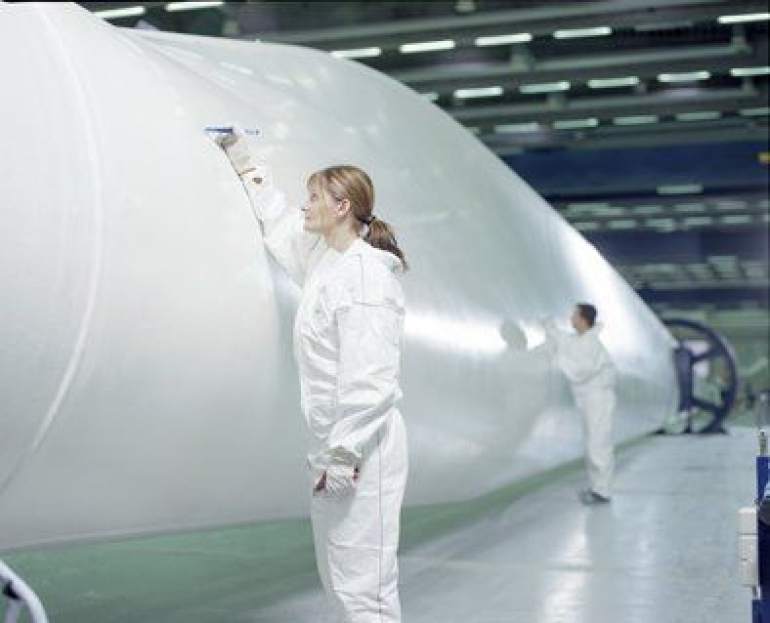 Following the publication of a newspaper investigation that sounded the alarm on LM Windpower's working environment, over 200 people working for the world leader in the manufacture of wind blades, said, in less than a month, that they suffered from pathologies related with styrene intoxication. The Minister of Labor announced a broad operation of investigation and assistance. Since 1995, the Labor Inspectorate has issued several dozens of injunctions concerning the chemical environment in the group's Danish plants.

Denouncing unprotected styrene exposure for the employees of LM Wind Powers, the Berlingske Tidende daily published, on February 20th, an alarming survey on the working environment in the group’s Danish plants. In addition to the stories of employees suffering from pathologies caused by this exposure, the daily mentioned, among other things, dozens of injunctions issued by the Labor Inspectorate (Arbejdstilsynet) since 1995 to the group’s 13 Danish factories because of the chemical environment at work. Minister of Labor Inger Støjberg quickly launched a broad operation of investigation and assistance on this case, which she intends to be “as comprehensive as possible” two years only after the mercury scandal in the Grinsted de Danisco plant where the authorities took a particularly long time to react.

Following the Minister’s request, the Labor Inspectorate published, in March, a first report on its inspection in the group for the 2000-2010 period. The organization says it ‘acted’ 52 times for problems related to chemical substances used for production, for no less than 31 injunctions, 10 “stoppages” of essential problems and 11 “instructions”. Besides, the report points out that the National Institute for Industrial Accidents and Occupational Diseases (Arbejdsskadestyrelse) received, over the same period, 786 complaints from LM Wind Power employees, 323 of which about occupational diseases, and 463 about industrial accidents.

The Minister of Labor mobilized LM Windpower and the trade unions concerned so that former and current employees of the group suffering from pathologies caused by exposure to styrene could be sent to the National Institute for Industrial Accidents and Occupational Diseases (Arbejdsskadestyrelse), where she established a dedicated taskforce. Thus, in less than a month, the LM Windpower hotline receive over 120 calls, while the 3F union declared, in early April, that it received complaints from 133 employees linking their pathologies to styrene intoxication. However, since it was founded in 1978, the group has employed several thousands of employees across the country, so the number of employees concerned could keep on growing.

Towards the ban of dangerous substances?

Experts are calling on the Minister to go further, introducing a register for employees in the plastic and glass fiber industry, to better define the dangerous impact of styrene on human health and possibly toughen work environment regulations on its use. Without further delay, and notably relying on LM Windpower’s case, the socialist party, SF, sent to Parliament, on April 5th, a motion to impose a ban on dangerous substances when there are alternatives and recommend the use of robots when these substances cannot be replaced, to avoid contact between the workers and these substances.

However, trade unions involved in the LM case say this would not necessarily improve safety, and could lead to job losses as Danish industry moves elsewhere. "The question is not to ban it, because there are other industries where they are using it correctly," said Jesper Lund Larsen, environmental and occupational health co-ordinator for Denmark's 3F union.

Rival blade manufacturers Vestas and Siemens stopped using styrene in their manufacturing process in the 1990s. However, switching from styrene requires the increased use of epoxy resin, which is highly toxic and requires specific safety measures. "Epoxy is safer when you are using it, but when you finish, it creates more dust, which is dangerous. Why should we ban styrene just because one company is not using it correctly?", said Larsen. According to the trade unionist, several health issues are associated with the materials used in rotor blade manufacturing, and the exact "red line" linking workers' ailments with what they may have been exposed to in the workplace still needs to be worked out.

Pioneer in the Danish green industry, LM Wind Power has been making wind paddles since 1978 and currently employs over 4,600 people in 7 countries (Australia, Canada, China, Denmark, India, Spain and the US.