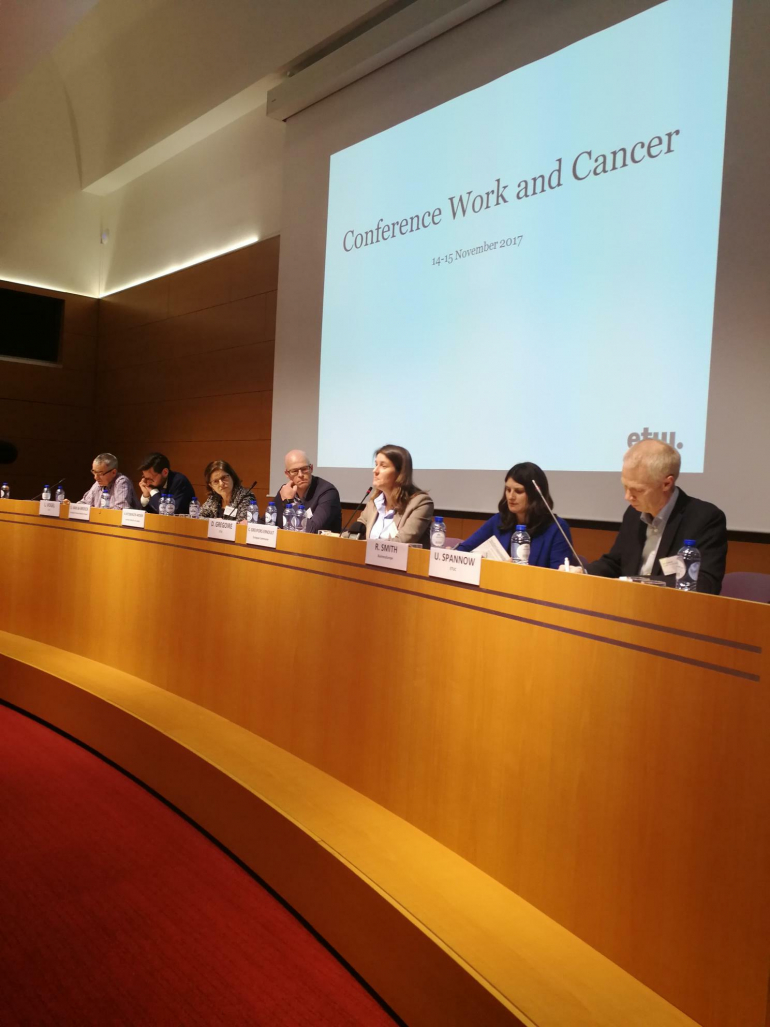 ‘Workplaces are not merely spaces where people work – they are spaces where people live their lives. Anything which would be prohibited on grounds of consumer health or environmental protection should also be prohibited in workplaces.’ These were the words with which Laurent Vogel, a researcher at the European Trade Union Institute (ETUI), closed the ‘Work and Cancer’ conference organised by the ETUI on 14 and 15 November in Brussels.

Social health inequalities were a recurring theme throughout the event, culminating in compelling testimonies from three women who had formerly worked at a factory in the Netherlands supplying Lycra to the US chemical giant DuPont and been exposed to a powerful solvent used to manufacture the well-known synthetic fibre. This exposure had major effects not only on their own health (such as cancers and gynaecological problems), but also on that of their children (including still births, miscarriages and learning disabilities).

Marian Schaapman, head of the ETUI’s Working Conditions, Health and Safety Unit since October, followed up these brave testimonies by reiterating the calls made by trade unions to include reprotoxic substances in the European Directive on the protection of workers from the risks related to exposure to carcinogens or mutagens at work, which is currently being revised.

She said that the cases from the Netherlands amply illustrated the invisible nature of occupational diseases, and that this invisibility was all the more unacceptable because those hit hardest were often workers in ‘precarious’ jobs (atypical workers, women and low-skilled labour, for example).

The researchers who spoke over the two days of debates made repeated reference to the stubborn tendency for social health inequalities to be brushed aside, and David Gee, Professor at Brunel University London, provided a long list of examples. Before the 1950s, there was widespread indifference to the fact that workers in UK rubber factories were at far higher risk of bladder cancer as a result of their exposure to aromatic amines, and asbestos exposure peaked in the two decades after it was scientifically proven that this fibre is a carcinogen.

A study into the costs of occupational cancers in the European Union, commissioned by the ETUI and carried out by a consultancy firm, revealed that the highest levels of exposure to carcinogens are still experienced by manual workers. Taking France as an example, 36% of lung cancers, 10% of bladder cancers and 10% of pharyngeal cancers can be traced back to occupational exposure, and cancers at these sites are frequently associated with exposure to the carcinogens most commonly encountered in construction and industrial settings (asbestos, silica, hexavalent chromium, wood dust, polycyclic aromatic hydrocarbons etc.).

The response by the EU authorities to this hidden health crisis – which claims 100 000 lives per annum – fell far short of the mark for many years, but the situation is starting to change. Partly in the interests of boosting its social credentials, and partly because of the push it has been given by Parliament, the Commission has done a great deal of work in recent months to improve European legislation on the protection of workers against carcinogens.

After grinding completely to a halt during Barroso’s time at the helm of the Commission, the process for revision of the Carcinogens and Mutagens Directive is now – provided the Commission delivers on its promises – scheduled for completion by 2019 with the adoption of 50 binding occupational exposure limits (OELs). The discussions currently in progress centre on the question of exactly how low these limits should be, and even though a measure of consensus has been reached in recent months on certain substances (hexavalent chromium and hardwood dust, for example), disagreement persists on others.

The trade unions remain sceptical about the limit value adopted for silica, and the US epidemiologist David Michaels, Assistant Secretary of Labour for OSHA (Occupational Health and Safety Administration) during the Obama Presidency, noted that this limit value was twice as high as that adopted during his time in office.

Stakeholders’ opinions are divided on other carcinogens; for example, diesel engine exhaust emissions (DEEEs) were slated for inclusion in the second batch of OELs for carcinogens, but did not appear in the final proposal for the directive. Tony Musu, the ETUI’s expert on chemical risks, reminded attendees that up to 19 million Europeans were exposed to DEEEs at work, and Charlotte Grevfors, a Commission representative, suggested that DEEEs might be included in a future batch of OELs.

Several speakers pointed out that, even though the adoption of OELs might at first glance appear to be a neutral process, a great deal of bargaining between competing interests went on behind the scenes. Emmanuel Henry, a French sociologist, explained that OELs of this kind were invariably the product of a ‘social compromise’, the central basis for which was the number of human lives a society was prepared to sacrifice in order to ensure the continuation of certain economic activities.

Anna Ritzberger-Moser, representative of the Ministry of Labour of Austria, which will hold the Presidency of the EU Council in the second half of 2018, stated that the adoption of a limit value should always be regarded as a ‘starting point’, or in other words a first stage which may result in carcinogens being replaced by other substances in workplaces.

It is worth remembering that the Directive obliges employers to replace carcinogens, ‘as far as is technically possible’, by substances which are not dangerous or are less dangerous to health or safety.